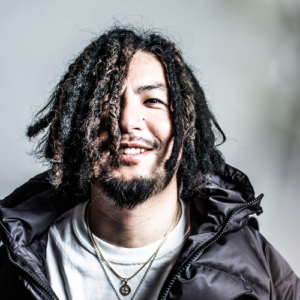 Takayuki Matsumine
Japanese Artist, born and raised in Shizukuishi Iwate-prefecture, and based in Morioka Iwate

A world that can be reproduced and transcended by data.

Today, we are forced to redefine ourselves and the space in which we exist. We humans and the world we live in can be recreated by data, and that new world will functionally and visually surpass the God-created world in which we have lived to this day. It can be devastating. We are standing in the “Grey Area”, a new world made up of the real world and data.

The real me exists only as the pilot behind my avatar. We surrender ourselves to our avatars and explore new ways of living in the world. Communication with people, whether written or spoken, is nothing more than a reproduction of data, and that data is exchanged. The colors of the waters of the rivers and seas in that new world are aesthetic beyond the natural laws of our former world. Who decided that “August leaves blowing in the cool breeze must not be green”? Now that we are the gods who create that new world, let us design the laws of nature. Let the rainbow-colored fish swim in the air just like you’ve dyed your hair in a pop color gradation. Its appearance and function can all be created with data.

Or, let’s say that someone I really like appears in front of me. The encounter is no coincidence. Nor is it the result of my actions and pursuits. Because AI knows all my tastes. Only information that has been algorithmically tailored to my tastes appears in front of me. On the contrary, inconvenient things do not appear. Everything in the new world we live in will suffice with the manipulation of data.

“Draw a figure of human contradiction”.

Because I can’t move my limbs freely due to a serious injury, I use CG to paint the original drawings. For me, it’s easier to create an original image with CG than to draw a picture by hand on a sketchbook. From that accident, which gave me lifelong injuries and disabilities, I became aware that I was able to live longer thanks to science, medical care, and technology. . On the other hand, my heart always wants to return to the nature in which I was born and raised. Despite the fact that CG is art created with the product of technology, I would like to insist on returning it to a physical state that has been touched by human hands and breath. I decided to recreate the original painting, which was reproduced in 3D with CG, on the canvas with paint. The recursive process should be carried out as if pulling one’s soul and body back from the world of CG, the inorganic data, to the physical world with a raw smell.

The reason why I naturally long for nature is that I want to live in a world where flowers and life perish with time, rather than drowning in a garden of pleasures that has been algorithmically tailored to our tastes by AI. This idea and position of mine are full of contradictions. It also overlaps somewhat with the position of us humans, who are unable to escape from the benefits of technology while destroying nature.

And as a Japanese myself, I have come to realize that I am in that gray position. We are a nation forever manipulated by the context and rules of the world’s capitalist leaders, and we do not have the strength to serve as world leaders of our own volition. Accept the cultures and rules that flow in from the West and the East, and stand there as a non-subjective self.

Privacy Settings
We use cookies to enhance your experience while using our website. If you are using our Services via a browser you can restrict, block or remove cookies through your web browser settings. We also use content and scripts from third parties that may use tracking technologies. You can selectively provide your consent below to allow such third party embeds. For complete information about the cookies we use, data we collect and how we process them, please check our Privacy Policy
Save